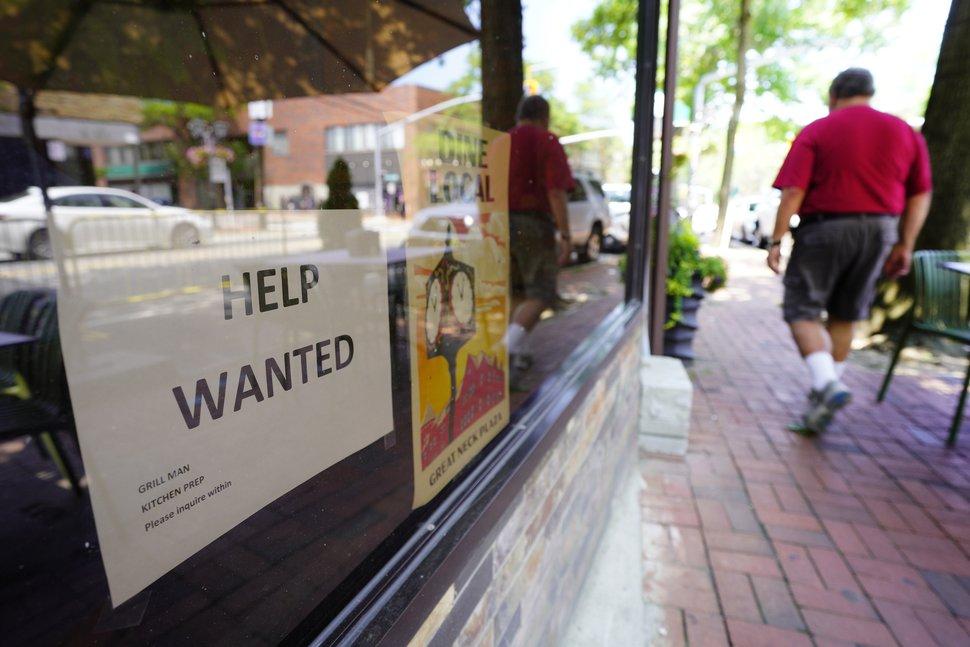 The number of Americans filing first-time claims for unemployment insurance fell slightly last week to 400,000 from the prior week's revised 424,000, the Labor Department reported on Thursday.

The decline in claims comes as companies continue to report difficulty finding workers, with 9 million job openings currently – 2 million more than before the coronavirus pandemic. More than half the states have either curtailed or plan to halt the federally enhanced unemployment benefits that have been putting an extra $300 per week into people's pockets. The additional benefits are set to expire on Sept. 6.

"Employers, particularly in the leisure and hospitality realm, including bars, restaurants, hotels and travel-related businesses, are struggling to match their resources with strong demand from consumers," says Mark Hamrick, Bankrate's senior economic analyst. "Many owners and managers are looking ahead to September when they hope the end of heightened federal unemployment benefits might produce additional applicants for open positions."

Jobcase, a social media platform for workers, says that interest among job-seekers in the retail industry was 42% higher in June in states that kept the enhanced benefits in place than in states that cut benefits. In trucking, interest was 39% higher and in food services, it was 24%.

It is not clear whether the rapidly rising number of new cases of the virus, predominantly the more transmissible delta variant, will affect the economy or hiring. But early indications are that it has had little effect on consumers' desire to spend or get out and about.

Airline passenger traffic, measured by people passing through Transportation Security Administration checkpoints, is roughly comparable to the levels of two weeks ago, with around 1.9 million to 2 million daily passengers.

However, Morning Consult's Index of Consumer Sentiment on Wednesday posted a sharp decline in July, falling from 99.6 on July 1 to 95.3 on Tuesday. The drop was driven mainly by consumers' views on the future health of the economy, which Morning Consult economic analyst Jesse Wheeler noted could be tied to renewed fears over the virus.

"Fears over the Delta variant have driven the decline in sentiment, which could derail the U.S. recovery," Wheeler wrote. "However, with around half of the U.S population vaccinated, the most recent surge has luckily led to only a modest increase in covid-related deaths. Should this hold true, we could see consumer sentiment bounce back, as it has in the UK."

The pace of recovery of the labor market is one of two key factors the Federal Reserve Board considers, along with inflation, in setting monetary policy. The Fed concluded a two-day meeting Wednesday and left intact its near-zero interest rates and other accommodative measures.

As for inflation, it has been spiking of late, hitting a 5.4% annual rate in June, the fastest pace in 13 years, but some of that is being driven by things such as a dramatic increase in used car prices, which the Fed believes is temporary.

Private payroll firm ADP said Wednesday that workers who switched jobs saw wages increase 5.8 percent from June 2020, according to the ADP Research Institute. Overall wage growth was 2.3 percent in the second quarter, down from an average of 6% in the first quarter. Employers were able to add their workforces, with an overall increase of 3.5% in June.

"The increase in wage growth for job switchers could be driven by employers struggling to find talent and are willing to offer competitive compensation to secure employees," said Nela Richardson, ADP chief economist. "Leisure and hospitality, which experienced the greatest job loss due to the pandemic, is a notable exception to this overall trend. While leisure and hospitality led employment gains in the first half of 2021, it is the only industry where both job holders and job switchers are earning lower wages on average compared to a year earlier."